The “What’s So Cool About Manufacturing” student video contest provides 7th and 8th graders a unique opportunity to connect directly with local manufacturers as they use their curiosity and creativity to develop, shoot, edit and produce a “cool” video to document their experiences.  The contest is spearheaded by Manufacturers Resource Center.

“MRC is proud to bring What’s So Cool About Manufacturing to the Berks and Schuylkill area for its 7th year” states Rich Hobbs, MRC President & CEO. “The program’s continued success and impact can be attributed to the efforts the teachers and students have put forth, along with the many partners and community sponsors committed to building a future workforce which will in turn support economic growth and expansion in the region,” he concludes.

Student teams will partner with manufacturers in eleven regions across Pennsylvania this year, where videos will compete first in regional contests and then in the annual Statewide Awards in Harrisburg.  The statewide program is spearheaded by Manufacturers Resource Center.

Student teams from 27 Berks and Schuylkill County middle schools are partnering with 27 area manufacturers to produce their video submissions.  All videos will be posted on the “What’s So Cool” website WhatsSoCool.org, and will be open to the public for voting March 8-10, 2023 for the Viewers Choice Award. The Berks Schuylkill Awards Event is scheduled for March 21st, 2023, at the DoubleTree by Hilton in Reading, PA. The program’s continued success and growth can be attributed to the efforts the teachers and students have put forth in the community, along with MRC and its partners Kutztown Small Business Development Center, eMediaWorks and Sahl Communications, Inc., and the many community sponsors committed to its sustainability.

This year, we are excited to announce the following participating schools and the featured manufacturers they are paired with: 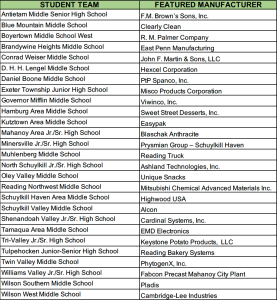 “We are thrilled to kick off year 7 of the WSCM program in Berks and Schuylkill,” said Karen Buck, Director of Workforce Initiatives for MRC.  “The potential for careers in manufacturing are demonstrated first-hand by the manufacturers and the students get excited about the possibility of working in a cool, modern environment that they may never have imagined.  We encourage students to explore CTE and STEM education as they prepare for their high school years. The program creates limitless opportunities for both manufacturers and students.”